This article is taken from Acura's Fall/Winter 2012 Style magazine, page 49.

Jon Ikeda, chief designer and senior manager of the Acura Design Studio in Torrance, California, is a busy man - in charge of everything from new Acura production models to such advanced visions as the NSX Concept, Acura Style caught up with him at the Design Studio to discuss the RLX Concept on display just a few feet away.

What was the overall design philosophy for the RLX Concept?
A little more serious, a little more formal. We really wanted to establish that it's a flagship. You'll see striking, undulating lines. A good stance. A more spacious interior. And on certain versions, you're going to see hardware directly tied in the NSX supercar. So you know the performance is there.

What exterior and interior features are you most excited about?
In proportion from the outside, it's grown up a little bit. And the interior is downright gorgeous. Even more luxury than we've had before. We also really love the new Jewel Eye headlight technology ... a little thinner, simpler, but very high tech.

What is the most difficult aspect of designing the RLX?
We really wanted to create something that does justice to all the RLX's new technology. But just when you've drawn that nugget of gold, some new regulation will come in that requires us to change the shape by 10 millimeters - 10 millimeters, are you kidding me!? That's a lot! So we're always trying to find that right balance.

It's been a big year for Acura. What's next?
The brand itself is maturing. Don't think for a second that just because we're coming out with all these cars that we're done. We're continuing to push. It's exciting. By the time the RLX comes out, we'll already be well ahead on the next new models. There are things behind this door right now that take Acura on to the next level. But of course, I can't show you! 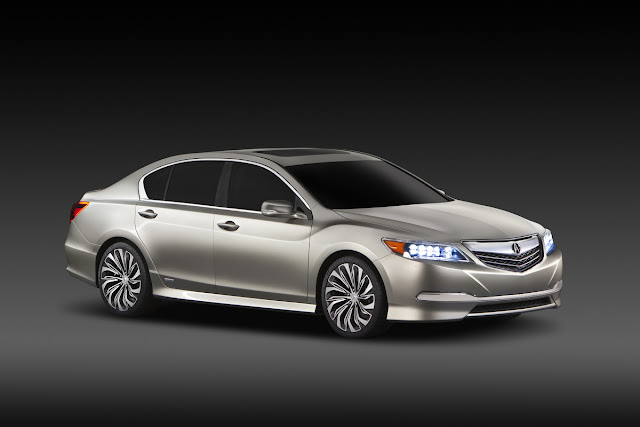 I have this car on my short list for next year. Altho it does look nice in pictures, I do wish Acura had made it more exciting looking ... I do not expect them to hit E/5 level sales but if they get GS or M levels, that would be a win. This is a little on the bland side - at least in pics.

Unfortunately, not sure if I can wait a whole year for the hybrid to come out. That should have been first or at the same time as the FWD, so at least the RLX debuts w/ some kind of a bang.

Unfortunately, not sure if I can wait a whole year for the hybrid to come out. That should have been first or at the same time as the FWD, so at least the RLX debuts w/ some kind of a bang.

I agree with that statement. I also agree with that the car is kind of bland, but I think Acura doesn't want to take risks right now with a radical look. IMO, They failed with the bucktooth look.