Honda CEO Takanobu Ito revealed that a new sports car from the Japanese automaker could be launched with a roadster body like the EV-STER as well as either battery-powered electric or gasoline powertrains. 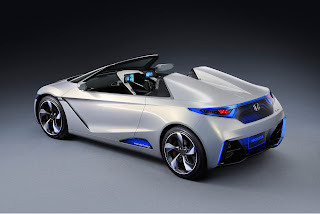 The Acura ILX Concept is a styling study of an all-new luxury compact sedan scheduled for launch in spring 2012. To be positioned at the gateway to the Acura lineup, the ILX will feature three powertrains including Acura's first-ever gas-electric hybrid. Acura also will unveil a prototype of the 2013 RDX, the second generation of Acura's five-passenger SUV. Finally, Acura will debut the NSX Concept, which represents the styling direction for the next generation of Acura's super sports car.

Honda Manufacturing of Indiana, LLC (HMIN) today announced that it will be the exclusive manufacturer of the Acura ILX, an all-new luxury sedan going into mass production in Indiana in the spring of 2012.

The Acura ILX will join the TL sedan, ZDX crossover vehicle, and the MDX and RDX sport-utility vehicles as the fifth Acura model produced exclusively in North America. Acura finished second among all luxury brands in the J.D. Power and Associates' 2011 Initial Quality Study.

HMIN was recognized earlier this year for its outstanding quality as one of only three automobile plants globally to earn a Platinum Award for outstanding quality based on the results of J.D. Power and Associates' 2011 Initial Quality Survey℠ (IQS). The plant recently added nearly 1,000 associates to support the move to two-shift production, which started on Oct. 24, 2011, doubling the plant's capacity to 200,000 vehicles per year. The Acura ILX will be the first hybrid vehicle to be made in America at a Honda plant. Gasoline engines for the new Acura ILX will be produced at the Anna, Ohio, engine plant of Honda of America Mfg., Inc.

Honda Manufacturing Indiana, LLC (HMIN) in Greensburg, Ind., began operations with production of Civic Sedans in October 2008. HMIN added production of Honda's natural gas-powered Civic Sedan in May 2009, and began producing Civic for export to markets outside North America in September 2009. With employment of approximately 2,000 associates and capital investment exceeding $550 million, HMIN started operations as a zero-waste-to-landfill factory, meaning no waste is sent to landfills, and maintains one of the lowest environmental footprints of any automobile plant in Honda's global production network.

Some things I have been hearing: