Honda will further accelerate a focus on the following three pillars:

1. Strengthening the foundation for global growth 2. Strengthening the foundation for global growth:

(It must be noted that Honda has no intentions of making an Acura hybrid, but it's still nice to know what Honda is getting.)

* In addition to Civic Hybrid, Honda will introduce a new dedicated hybrid vehicle in 2009. The new dedicated hybrid vehicle will be equipped with a newly developed lightweight and compact IMA (integrated motor assist) system and offered at a more affordable price level base on Honda's efforts to significantly reduce cost. The worldwide sales plan for this vehicle is approximately 200,000 units annually.

* A new sports hybrid, based on the CR-Z introduced at Tokyo Motor Show, will be sold globally. Diesel:
* The second-generation i-DTEC engine will first be installed to models for European markets in 2008, North America in 2009, and Japan will follow. (An Acura diesel may not be totally out of the question.) 3. Accelerating our efforts in Japan to strengthen the core characteristic that make Honda unique:

Production:
Automobile - Construction of a new engine plant in Ogawa and new auto plant in Yorii began in fall 2007 with a target to begin operations in 2009 and 2010, respectively.

Automobile Business in Japan:
* To further strengthen the Honda brand, all-new versions of four different vehicles will be introduced in Japan during 2008. Honda's goal is to expand sales by offering attractive products which bring more joys to customers.

For the full article: Honda Worldwide News
No comments:

Honda R&D Co., Ltd. is responsible for research and development activities, announced plans to build a product development facility dedicated to the Acura brand within the new R&D center being constructed in Sakura, Tochigi. The new R&D center will have multiple test courses, which replicate various driving conditions ranging from high-speed driving to urban driving. The construction of this new R&D center began in November 2007 and is scheduled to become operational in 2009. The existing Automobile R&D Center in Tochigi will continue to strengthening product development for the Honda brand and development of next-generation power plants including hybrid, diesel, and fuel cell power plants.

Due to the belief that strengthening advanced technology R&D capabilities in Japan will become increasingly important in order for Honda to continue to grow and advance globally. In April 2006, Honda R&D launched a new organizational structure separating the product development functions for the Honda and Acura brands. With the addition of a dedicated development facility for the Acura brand, Honda R&D will further strengthen product development capabilities which clearly define the unique characteristics of each brand and accelerate development of products that offer new value for the customer.

Including test courses and the dedicated Acura development facility, the overall size of the new R&D center in Sakura is expected to be approximately 2.3 million square meters (m2), with related investment expected to be approximately 48 billion yen. Honda aims to begin partial operation of this state-of-the-art and environmentally-responsible facility in 2009, with full operations in 2010.

This is great news to all Acura fans because there has been much criticism about Acura vehicles just being glorified Accords. Hopefully, Honda/Acura can change this image to further advance the Acura brand, which was the first Japanese luxury brand. Toyota and Nissan soon followed with the Lexus and Infiniti brands.

Honda's CEO, Takeo Fukui, set the original time-frame of 2008-9 for the NSX's replacement, however the "NSX" was a no show at this year's Tokyo Motor Show. Well now Honda has confirmed a 2010 date for the debut of the much anticipated next-generation Acura NSX. “We are developing it without any delay, so most probably we will have it in the period we already promised,” says American Honda President and CEO Tetsuo Iwamura. Iwamura did not give any other specifics on the development. The new NSX's launch would most likely correspond with the global launch of the Acura brand. When asked whether the new NSX will carry an Acura badge in its home market for the first time, he says, “I can’t comment, but (the) NSX is a car for Acura, especially in the United States.” 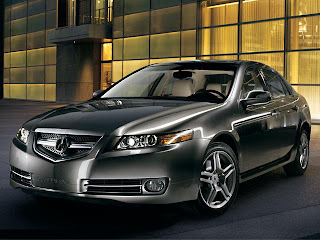 SYMPTOM
A moan or whine is heard when turning the steering wheel when the engine is cold. There may be air bubbles or foam in the power steering reservoir. The noise usually goes away when the engine warms up.

PROBABLE CAUSE
Air enters the power steering pump through the inlet joint O-ring.

Out of warranty: Any repair performed after warranty expiration may be eligible for goodwill consideration by the District Parts and Service Manager or your Zone Office. You must request consideration, and get a decision, before starting work. 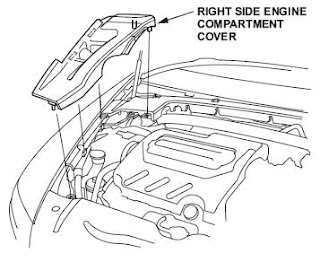 2. Remove the bolt holding the inlet joint to the power steering pump housing. 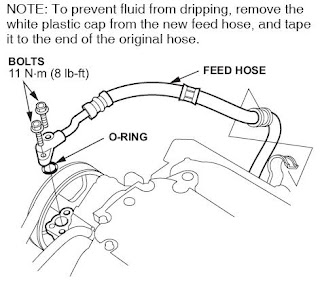 3. Place a shop towel under the pump inlet.

4. Twist the inlet joint back and forth until it is loose, then carefully disconnect the joint and point the hose upward to minimize fluid loss.


6. Apply power steering fluid to a new O-ring, and install it on the inlet joint.

8. Top off the power steering fluid, if needed. Start the engine, and let it idle. Confirm that the noise is gone and that the system is operating properly.

If this site helped you save some money, please donate via PayPal. Any amount accepted! Thank you. :) BACKGROUND:
Unexpectedly high heat deterioration and bending stress can cause the power steering feed hose to crack, resulting in a leak. A leak from the feed hose can drip P/S fluid onto drivetrain components and the catalytic converter below, causing a burning odor and possibly smoke. The low fluid level resulting from the leak may also cause the power steering pump to whine.

CLIENT NOTIFICATION:
All owners of affected vehicles will be sent a notification of this campaign the week of December 17, 2007.

Some vehicles affected by this campaign may be in your new vehicle inventory. According to federal law, these vehicles cannot be sold or leased until they are repaired. To see if a vehicle is affected by this campaign, do a VIN status inquiry before selling it. In addition, check for a punch mark above the fifth character of the engine compartment VIN. A punch mark in that location means the power steering feed hose kit was already installed at the port, and the vehicle is ready to be sold or leased. Click here for a complete PDF on the issue.


SIDE NOTE RELATED TO ACURA TL'S:
Although, it's not a full on recall, there has been some reported problems with the 2004 Acura TL having a power steering problem. The symptom is the vehicle makes a horrible noise during cold starts. My cousin had to take his almost out of warranty 2004 Acura TL automatic in to the dealer so they can replace the power steering pump (under warranty). Someone on the Acurazine.com forum noted to make sure that the power steering hose also gets replaced when having this service done.