The all-new 2014 MDX, the third generation of Acura's acclaimed 7-passenger luxury performance SUV, goes on sale at Acura dealerships nationwide, offering comfort, connectivity and performance every luxury customer wants at a price that no other luxury brand can match. Available for the first time in a new two-wheel drive model, pricing for the 2014 MDX begins with a manufacturer's suggested retail price (MSRP) of $42,290*, a substantial $990 reduction in starting price versus the outgoing 2013 model.

New from the ground up, the 2014 MDX has a 2.8-inch longer wheelbase, and is lower and narrower for reduced frontal area and enhanced fuel efficiency. With high-strength steel, aluminum and magnesium comprising 64-percent of its body structure, the 2014 MDX is 275 pounds lighter than the previous model with the lightest published weight in its segment, which directly contributes to improved acceleration, nimble handling, and class-leading fuel economy ratings.

The 2014 Acura MDX is powered by a new 290-horsepower direct-injected i-VTEC 3.5 liter V-6 powertrain with fuel-saving Variable Cylinder Management technology. Compared to the 3.7-liter engine it replaces, the 3.5-liter V-6 in the 2014 MDX offers an 8-percent increase in torque at engine speeds below 2,750 rpm for greater overall responsiveness. Due to improved operating efficiency, horsepower output per liter is up two percent and torque output per liter is up 4.4 percent compared to the previous model's engine. Together with the 2014 MDX's substantial reduction in curb weight, overall performance is enhanced, including quicker 0-60 mph times and 8-second quicker lap times on Germany's Nürburgring Nordschliefe (North Loop), where both the new and outgoing model were extensively tuned and tested.

The 2014 MDX is the third generation of Acura's top-of-the-line SUV to be designed, developed and engineered in North America. Production of the new MDX and its powertrain will take place at the company's state-of-the-art manufacturing facility in Lincoln, Alabama.

In designing the new MDX, Acura engineers built on the foundation of its excellent dynamic performance with a focus on three core values: class-leading fuel efficiency, new levels of luxury comfort, and top-level safety performance.

There are four MDX grades, each available with front-wheel drive or Super Handling All-Wheel Drive (SH-AWD): 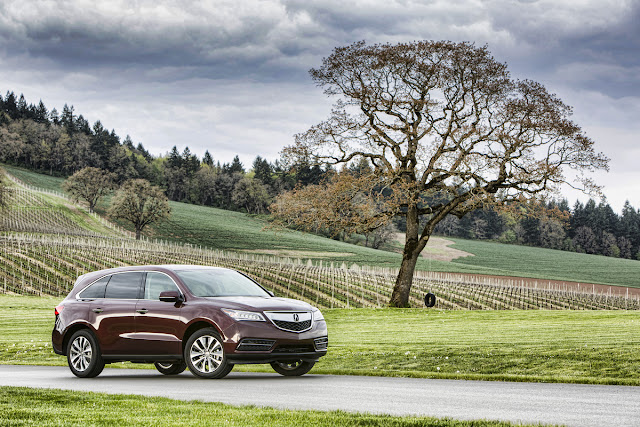 For more on the 2014 Acura MDX, click here for the press release.